Learning objectives: at the end of this lesson you should be able to-

Background: What is a percent change?

You see the use of percents all the time in the news. Medical studies report "a 50% increased effectiveness," the state highway patrol may report "14% fewer traffic accidents," or a commercial may claim "50% whiter teeth." People use of percentages to convince us of the importance, accuracy, or effectiveness of their idea. And yet, without a basic knowledge of how to calculate percentages, we may be persuaded of the importance, effectiveness, or usefulness of an idea - contrary to our best interests. Most people recognize this challenge with percent changes, and conclude to either ignore or believe percent change claims when evaluating the credibility of evidence.

So too in history, a failure to understand percent change can influence a historian's analytic conclusions. Does a 10% increase in the per capita GDP dramatically improve a countries overall quality of living? As we'll see, it depends on what counts as "10%."

The equations for change are

Saying that the mortality rate increase by 1% or 100% are both accurate statement, but which number do you feel captures the importance to a farmer?

Important: if you only have two numbers to begin with, you only calculate absolute change (b-a) and relative percent change (b-a)/a) x 100.

Questions this assignment addresses: How can we use numbers to understand our past? You will read, use websites and a spreadsheet, answer questions, and submit your answers to your Assignment file.

1. For the first part of this lesson, please play a game.

Play the game. Do you understand why you should always switch?

If not, go to http://webs.wofford.edu/bednarjt/monty/montyhall.html for an explanation.

2. Why do historical statistics matter?

Let's tackle that one word at a time, backwards. Statistics matter because we use numbers to measure our lives, whether it's the dollars in our bank account, the number of friends we have on snapchat, or how full a glass is (half full?) Increasingly, statistics are used to convince us in the truth of an argument. Yet, without a basic understanding of statistics, people often fall back into the cynicism that all numbers lie. Numbers are just information, and just as we apply the SIFT process to sources, so too can we apply certain standards for what is a credible statistic.

Why do statistics matter to history? Numbers show us trends, that is up or down, in parts of our lives that are important. How much food, per person, does one society provide over time? How is income distributed to a people, mostly to the rulers, or does every group have a sizable chunk? As well, numbers let us compare groups that are fare apart from each other in geographic or temporal terms. Did the Han Chinese of 100 CE have greater economic output than the Holy Roman Empire in Europe of 100 CE? Statistics matter because we can see trends (changes over time) and comparisons.

3. What is an average? Questions to answer.

To start, let's deal with a simple concept: an average. There are three types of averages, the mean, median, and mode.

For a text definition of these terms, see https://www.thoughtco.com/the-mean-median-and-mode-2312604

Questions: Please answer Let's say a large village had 25 people die in a single year. Below is the age of each deceased villager.

As a historian, when you see the word "average" you always need to ask if it's the mean, median, or mode and is that the most useful average for understanding the past.

If you'd like more help understanding mean, median, and mode, you can see a video here. 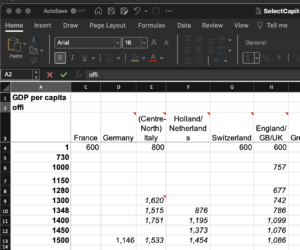 I expect this lesson plan to take approximately 1.5 hours, depending on the research involved.